Those Darned Kids (And Grandparents)

Like many things, marketing used to be much simpler; the days of brands targeting broad categories (i.e., adults 18-49 years old) are long gone. Today, there are three distinct generations within that one category (GenX, Millennials, and GenZ), each with a completely different set of values.

Before you accuse us of over-generalizing – yes, there are exceptions to every rule, but there many common characteristics that are too obvious to ignore. The consumer marketplace is comprised of five clearly-defined generations, and it’s more important than ever to understand the mindsets and influences that affect the buying decisions of each one.

There’s probably no better example of generation-driven marketing than the recent Nike campaign featuring Colin Kaepernick. While some consumers actively burned their Nike gear in protest, others hailed the campaign as a brave and important decision; one that will put Nike on the right side of history. As marketers, we are compelled to look beyond the emotion and determine whether it was a wise business decision.

Before we begin to assess the strategy of the campaign, it may be helpful to briefly overview of the characteristics of the five generations of consumers – and the events that shaped their behavior:

·      Feminism– more women in the workforce

·      The first generation to strive for work/life balance

·      Least brand loyal of all generations

·      The most socially conscious of all generations

·      Don’t handle criticism well (everyone gets a trophy)

·      Optimistic about the future

Now back to Nike. Was it a smart business move?

Marketing is all about sales. Nike’s core, most brand-loyal purchasers tend to be millennials, GenZ, and minorities. What does the data tell us about these groups?

·      Millennials popularized the concept of making purchases based on        social issues. They approve.

History will decide if Nike’s campaign was a wise one, but it is evident that the company was more concerned about touching the emotional chords of their most important customer bases than offending older generation sentiments and potential loss of revenue associated with alienating current customers. Then, there’s the simple math: Over the rest of their lives, 27-year-olds will purchase far more athletic shoes than will 72-year olds.

While it may have appeared courageous, we think that an athletic shoe manufacturer boldly betting big on attracting and creating brand loyalty with younger generations isn’t very controversial at all.

For more in-depth analysis of the attitudes and characteristics of each co-existing generation and further considerations for marketers, download our ‘Generations Explained’ overview here. We’ve used several (credited) resources that deliver insights into the changes happening in our society today and provide a glimpse into what’s in store for our future. 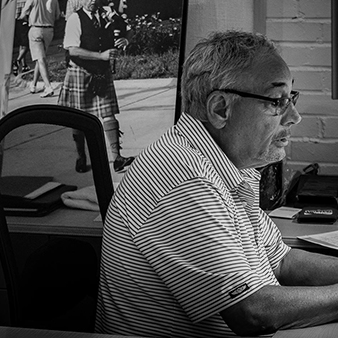 If you thrive on being the smartest person in the room, you won’t like hanging out with Ian. He’s worked on over 200 accounts throughout his esteemed career. He embraces new technology and communication, all with the mind of a keen strategist, and all for the benefit of our clients.

The Spoke Approach to Life, Love, and Marketing

The Multiple Benefits of Multi-Channel Marketing

How Spoke helped a strategic planning resource harmoniously connect with a wider audience.

back to blog page