Can you hear and see me now?

Advertising should make you visible, not invisible.

Question: What was the sweat factor of your last ad campaign?

You know, how nervous were you when your company’s last marketing piece was so “outside the box” that you were sweating bullets because you bypassed the “safe” or “expected” solution? It wasn’t that the creative was off strategy or offensive, but while all the competitor marketing was ‘Yinging,’ you decided to ‘Yang.’

For one marketing executive at Apple way back in 1984, the nervous factor was at DEFCON 1 for a TV commercial that would launch a new product to compete directly against computer Goliath IBM.

For starters, the board of directors hated the commercial. They asked him, “Why would you have our company attack a computer industry leader like IBM in our advertising? It’s suicide.” (They didn’t mince words.) And their valid concerns about the TV commercial were supported by focus group tests as well as ivory tower researchers that rated the spot sub-par, even going so far as saying it was “a failure of the highest magnitude.”

If that didn’t make this marketing executive lose sleep at night, then you can bet he probably stayed up worrying about the $1M spent to produce the spot; and everything else that was on the line: including sales, and his job if the commercial flopped. But to him, there was something special about the spot. It just felt right.

So, instead of giving in to internal company pressures, he listened to his ad agency advice and approved spending almost his entire TV media budget on one Super Bowl airing to launch the first Mac personal computer. Apple was about to attack IBM with one swift hammer blow.

Check out the commercial.

The results? An invisible product was made visible with what many in the ad profession consider the greatest TV spot ever created: Apple’s 1984 Super Bowl commercial. Not only did it introduce the new Macintosh computer using a memorable, breakthrough creative concept; that crazy gamble paid off in the form of $150 million in sales in just the first 100 days after the commercial aired just one time. The rest is history. And that marketing executive’s job didn’t become history. Hardly.

That was then; this is now: is it possible to create big ideas to market to the real-time generation?

Before taking a step forward and answering that question above, let’s take another step back. There was a time when men wore ties to baseball games and people hand wrote letters and put them in mailboxes for delivery within a week or two. That was when you had more time on your hands to read a book (printed on actual paper), chat with the family (face-to-face) and afterward watch TV. The only interruption as you were lost in an episode of the Brady Bunch was a short commercial touting “I’d like to buy the world a Coke and keep it company.”

Back then, the real thing that made marketing successful was a simple idea with mass appeal. Plus, you had whopping 30 seconds to capture your target audience as they sat on their couch eating their freshly microwaved Banquet TV dinner.

Then, on 6 August 1991, when the World Wide Web was born, the true simplicity of marketing died. Or at least seemed to. Bastard children birthed by this technology revolution included Facebook (where you can have any face you like), Twitter (where the really important things in life are stated in less than 140 characters) and, of course, Snapchat (where the most important messages are less than ten seconds in length and are vaporized for eternity within 24 hours).

So, instead of 30 seconds to capture somebody’s attention, you now have less than five seconds and must consider the countless other forms of media vying to reach them. It ranges from retargeting ads and web banners to Social Network Advertising (SNA) and Search Engine Marketing (SEO).

Yes, we’re living in the height of the information technology age, and you seem dumb if don’t use a smartphone. But the $64,000 question, or the average $1 to $2 cost per click question using Google AdWords, is this: is it still possible to create a marketing concept capable of standing out in the crowd? Can a company still deliver a captivating message to break through all this clutter and drive measurable sales just like that powerful commercial introducing Macintosh computer did way back in 1984?

Oh, and let’s not forget, you’re trying to reach this audience with your message while they are simultaneously on information overload. In fact, the statistics are daunting, even mind numbing. On average, a person is exposed to over 5,000 ad messages per day. It’s sensory overload on steroids.

The big idea you need starts with a digital strategy. According to the Huffington Post, “Your business needs tech-savvy people who can help you create, build out and maintain a digital footprint. Digital has replaced traditional marketing and to be successful, your business must be proficient in advertising across a mix of media platforms, social media, and mobile.”

It’s more than having a solid strategy in place; marketing success is also driven by content that is, as the Huffington Post states, “…visual, informative, topical and written so it resonates with and engages your customers.”

Rise to the top by falling fast.

It happened in October 2012. From 24 miles above the Earth, where temps are minus 70 degrees, Austrian skydiver Felix Baumgartner stepped out from the safety of his Red Bull parachute capsule as he began a 24-mile freefall jump from the outer limits of our planet’s atmosphere.

In the process, he became the first human to break the sound barrier (833MPH or MACH 1.24) without engine power – instead, he was fueled by the power of Red Bull.

An AdAge article on this event, and the attention it garnered, states, “A year after the stunt, a video showing the fall from Mr. Baumgartner’s perspective – with just the sound of the wind and the flapping fabric of his protective suit, racked up .3 million views. That brought the campaign’s cumulative views to more than 207 million … in the six months immediately following the stunt, Red Bull’s sales rose 7% to $1.6 billion in the U.S., according to research firm IRI.”

The best part for Red Bull was that sales reached an out of this world high of 5.39 billion cans sold in 2013 for a 3% increase over 2012 sales figures.

At Spoke Marketing, we think outside of the box, even outside the Earth’s atmosphere is required, to deliver an ROI your marketing dollars deserve. Sure, our ideas might make you nervous, even sweat a little more than you like at times. But our thinking, from strategy planning to actual creative delivery, is strategic, works harder than other competitive messages, and has the attention-grabbing power to make a statement that will be heard loud a clear by your target audience.

No matter people are talking about, we know how to get them to start talking about you. As Mad Men’s Don Draper would say with his lunchtime scotch in hand, “If you don’t like what’s being said, change the conversation.”

We do just that. 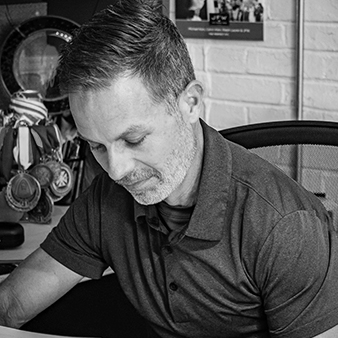 Among his many other talents, Chris has an uncanny ability to organize vast amounts of complex data and distill it to the core. This talent alone would make him invaluable. The added bonus is his creativity, concepts, and writing skills. Proof of his mad genius can be seen in the depths of Spoke’s marketing plans and on almost every piece in our portfolio.

The Spoke Approach to Life, Love, and Marketing

The Multiple Benefits of Multi-Channel Marketing

How Spoke helped a strategic planning resource harmoniously connect with a wider audience.

back to blog page